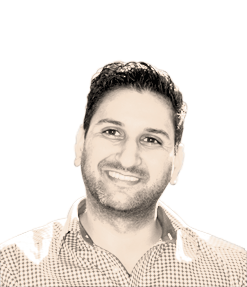 Hafez Ismaili M‘hamdi (1981) studied jazz guitar at various conservatories after secondary school. Then he was a professional musician and music teacher, and went on to study philosophy. In 2010 he was awarded his bachelor’s degree at Leiden University, and in 2013 he received a master’s degree in applied ethics at Utrecht University. He ended his career as a musician that same year, when he started his PhD at the Erasmus University Rotterdam’s Medical Ethics department. From 2014 he taught music and philosophy at Leiden University, until becoming a researcher and university lecturer in medical ethics at Erasmus University Rotterdam in 2017 and a lecturer in applied ethics at Utrecht University. After completing his PhD in November 2018, Hafez will obtain a full-time post at Erasmus University Rotterdam, where he will continue his research into responsibility for the health of children-to-be.

A relatively high proportion of children in the Netherlands are born sick or are stillborn, especially in disadvantaged neighbourhoods. Hafez Ismaili M’hamdi finds this unacceptable. He investigated the responsibility of all parties involved in the health of children-to-be: future parents, especially mothers, care providers and government authorities. Hafez is convinced that vulnerable women can only have healthier children if they are made more resilient.

A relatively high proportion of children in the Netherlands are born sick or are stillborn. I find that disquieting for a country with subsidised and high-quality care. There is also rising inequality: the prevalence of childhood diseases and mortality is relatively higher in poor neighbourhoods than richer ones. We can and must do something about this alarming situation.

In my PhD research I looked at the responsibility of all parties involved: future parents and mothers, as well as care providers and government agencies. The broad set-up of my research was inevitable as responsibilities could otherwise easily be played off against one other. You would get arguments along the lines of: ‘The government doesn’t need to get involved if the pregnancy is the mother’s responsibility.’ The starting point of my medical-ethical analyses were interviews with expectant mothers and care providers in the Charlois district in Rotterdam and the Schilderswijk district in The Hague.

One of the most surprising conclusions to come out of the interviews was the way in which future mothers in poor neighbourhoods regard their responsibility. Like all other mothers, they want the very best for their child, and thus feel responsible in this sense. At the same time, they are under the impression that they hardly have any effect on the health of their unborn child. Take the example of smoking. They often say: ‘I also know a mother who didn’t smoke and still had a sick child.’ Their child’s health ‘happens’ to them, as it were. One woman literally said to me: ‘What more can I do than pray for the best?’

This begs the question as to whether professionals should urge these future mothers to adopt healthier behaviour – no smoking, less fast food, more exercise – if it benefits their child. I investigated this issue by looking at an extreme example: if a complication means you can only save the life of a foetus by caesarean section, can you force a pregnant woman to undergo this surgery, even without her permission?

“You get healthy children in a healthy neighbourhood.”

Supporters and opponents of forced caesarean sections are currently caught up in a running battle. To overcome this deadlock, I didn’t so much examine the arguments that proponents used against their opponents, but the professional duties they have committed to as care providers. I tested their duty to respect patients’ autonomy for coherence with their other moral views. Can you, as a doctor, be of the opinion that you can force a woman to save her child and hold the conviction that you must respect her autonomy? I also looked at the ‘principle of fairness’, the duty to treat equal cases equally. Can you, as a care provider, force a woman to undergo a caesarean section to save her daughter, while not forcing a man to donate bone marrow to keep his son alive? This coherence test – philosophers like to use the term ‘reflective equilibrium’ in this context – is known chiefly thanks to the work of the American philosopher John Rawls (1921-2002). I use this test to show that some care providers too easily assign overly burdensome duties to future mothers.

Policy makers usually conceive social institutions’ responsibilities with regard to pregnancy as the need to extend additional help and care to (vulnerable) women who want to have children. As far as I am concerned, this doesn’t require extensive ethical analysis: this is something we have to do!

The problem is that vulnerable women are less successful at converting help extended to them into better health outcomes for themselves and their children. This is partly because they have adjusted their ambitions – in the sphere of ​​health, but also in education, work and income – to make living in a disadvantaged position more tolerable. This adjustment mechanism is also known as ‘adaptive preferences’, a concept developed by the American philosopher Martha Nussbaum (1947) and others. It is distressing that this mechanism perpetuates these women’s poverty.

One of my most important recommendations to policy makers is to increase the ambitions of vulnerable women who want to have children. This isn’t only done by investing in providing information about pregnancy in secondary vocational education, but with better housing, debt relief and education as well. Only then can you tackle adaptive preferences. That may sound like old hat, but it is the only way to give future mothers control over their lives again. You get healthy children in a healthy neighbourhood.

Hafez Ismaili M’hamdi, Before you were born: a moral exploration of parental and societal responsibilities for the health of children-to-be, Rotterdam, November 2018.