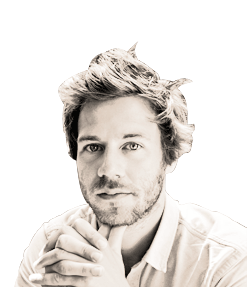 “Darwin wrote in one of his Notebooks: “He who understands baboon would do more towards metaphysics than Locke.’ In other words: research into animals and nature can yield profound philosophical insights. I believe this too.

In the Middle Ages scholastics thought that God laid down the standards of good and evil and humankind had acquired knowledge of this. To this day there are philosophers – including secular thinkers – who claim that there is a moral reality completely independent of humankind. My thesis is about whether this idea is sustainable in the light of our current evolutionary knowledge.

The idea that there is a moral reality outside humankind is described in philosophy as ‘moral realism’. One of the classic arguments for this realism relies on everyday experience. People usually experience moral judgements as being rather objective, much more objective than, say, judgements about taste. Whether spinach is tasty is a matter of personal preference; whether torturing babies is wrong is not. According to realists, this everyday experience of moral objectivity can best be explained if there is indeed a moral reality outside us. But recent research by evolutionary psychologists suggests that this experience can also be interpreted as an evolutionary adaptation. That is one of the reasons why an appeal to our ‘experience of objectivity’ fails to provide convincing evidence of moral realism.

Good philosophy is not detached from empiricism; it is driven by it. This does not mean that scientists have the final say about whether moral judgements are objective. Scientists typically investigate the origin of morals; philosophers typically investigate their justification – we should not confuse the two. But philosophical justifications often do build on scientific knowledge and can sometimes be disproved by science.

Conversely, philosophers also contribute to science – for instance, by combining specialist knowledge from various disciplines. Absent such efforts we don’t get the full picture of morality’s origins. Consider the work of the Dutch primatologist Frans de Waal. He argues that we find many of the basic building blocks of human morality in other animals. For example, a first step towards the so-called ‘golden rule’ can be found in primates’ reciprocal behaviour: ‘I scratch your back, you scratch mine’. But De Waal does not give an explanation of more sophisticated moral judgements, such as: ‘A distant foreigner’s life is equally valuable to your next-door neighbour’s life’. You will not find a bonobo making this judgement. To explain the origins of such judgements, we need to synthesise knowledge from various disciplines – not just evolutionary biology, but also the likes of anthropology, history and psychology.

‘What we regard as moral truths contain traces of our evolution and lessons learnt from history.’

In my dissertation I argue that certain arguments for realism are unsustainable. Take an argument by the contemporary realist Michael Huemer (expounded in this TED talk). Looking at the history of the past few centuries, Huemer argues that we can see a clear pattern of convergence towards the same global moral values, such ​​as human dignity, opposition to violence, anti-racism and opposition to slavery. He considers this evidence of moral realism: there are objective moral values ​​that we have been able to identify over the course of history. I think this historical convergence, in as much as it exists, is better explained on other grounds. It is not that we have ‘discovered’ a moral reality over the course of time; our values ​​have been transformed by changing socio-economic circumstances and the lessons learnt from history, from the likes of oppression, slavery, war and genocide.

I also defend an alternative conception of moral objectivity. It asserts that a moral proposition – say, social inequality is undesirable – is objective when it can withstand the test of well-informed critical appraisal from various points of view. If so, then apparently there are good reasons to defend this proposition. It is immaterial whether this assertion reflects an ‘evolved’ preference or not. Thus understood, moral objectivity is compatible with an awareness of the evolutionary and historical origins of our moral values.

We would be fooling ourselves to think there are timeless moral truths, completely independent of how we evolved and developed historically. These do not exist. What we regard as moral truths contain traces of our evolution and lessons learnt from history.