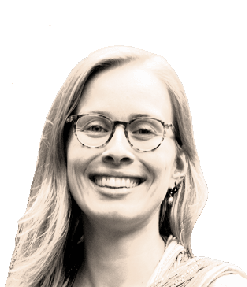 While earning her bachelor’s degree in philosophy at the University of Groningen, Jojanneke Vanderveen also studied jazz vocals at the Prins Claus Conservatoire, from which she graduated cum laude in 2011. For her research master in philosophy at the University of Amsterdam she wrote a thesis on the libertarian thinker Ayn Rand. Early 2020 she hopes to receive her PhD from Vrije Universiteit Amsterdam.
Ever since her years as an undergrad, Jojanneke has been an active member of the Dutch green, left-wing party GroenLinks where she was president of the independent youth organization DWARS and member of the permanent party platform committee. Currently she’s in charge of sustainability issues at the labor union AVV. More info, see: www.jojannekevanderveen.nl .

A WARNING TO IDEALISTIC POLITICIANS

An idealist through and through, Jojanneke Vanderveen personally believes political change can’t happen fast enough. Even so, she’s convinced that the road to change is paved with compromise. Democratic societies by definition contain a multitude of interests and opinions. Those in power ought to take this pluralism into account. Only then is it legitimate for them to use coercive power. Consequently, politicians can’t avoid making concessions. In her dissertation on political legitimacy Jojanneke demonstrates why this is so important.

Politicians make decisions with far reaching social implications all the time. Decisions about climate change for instance, a topic dear to my heart. On the one hand an administration has to meet objective climate goals, on the other it needs to build support for its policies. Sustainability may clash with various other interests of citizens. Careful steps in the energy transition process often seem too small in light of the climate goals of the Paris Agreement.

The central research question in my dissertation is: how should politicians reconcile a long-term vision with short-term policy decisions? Put differently: how to make pragmatic choices without selling out your ideals? That’s the question with which political legitimacy concerns itself. I find that question both compelling and important because I myself am an idealist to the core. I recognize myself in those socially engaged citizens who grow desperate because of the sluggish pace of change. However, I’m increasingly coming to the conclusion that those in power don’t have the leeway to simply push through change. Choosing to do so without proper support amounts to bad governance.

The importance of support underlines the urgency of the political legitimacy question. With their decisions, politicians coerce citizens into doing certain things and refraining from others. Laws and other government measures can have far reaching ramifications for a society, especially if citizens decide to oppose them. Measures shouldn’t just be well intentioned, the government should make sure that they actually yield the desired outcomes.

If there’s one thing I wish to accomplish with my research, it is to caution politicians with a distinctly idealistic agenda, primarily those in the executive branch, such as city councilmen and ministers. Whether it’s about the environment, healthcare, or immigration, the legitimacy of a measure doesn’t just depend on the goals that politicians wish to accomplish. The social context in which they take their measures is just as relevant to determine the success of a political decision. No matter how lofty the goals, those in power should always consider the fact that there are citizens who do not agree with them. This pluralism is characteristic for the context in which politicians make their decisions.

Take the city council of Amsterdam and their plan to exclusively allow zero emission vehicles in the city by 2030. In itself a wonderful goal, but not enough to justify the plan. There’s a real chance that by that time the 50.000 to 70.000 charging stations, critical to the success of this ‘mobility plan’, won’t be in place. This is not a moral dilemma in itself. The responsible authorities could step up their effort to install those charging stations and instead of reaching their goal in 2030, they may do so in say 2035.

“Good leadership or governance means having the willingness to compromise.”

Nevertheless the plan can have negative consequences. It’s not unthinkable that by 2035 many people still won’t be able afford an electric car. Add a lack of affordable alternatives and this would be a moral dilemma. You hurt part of the population; after all, some will see their mobility diminished. On top of that, this decrease will exacerbate the inequality between this disadvantaged group and those who can afford to buy an electric car. Lastly, the choice to invest in tens of thousands of charging stations also means that the city of Amsterdam may not be able to fund other projects. How does the mobility plan relate to the city council’s other goals? These are questions which need to be answered in order to determine whether the mobility plan is justified.

In other words: authorities who wish to make morally sound decisions should begin by conducting the best possible survey of the consequences and then weigh the negative effects against the desired outcome. They should also weigh their own objective against other goals – with inevitable compromises as a likely consequence. Measures can be thwarted by citizens who do not want them, or they can have unwanted side effects. An important conclusion therefore, is that a compromise is not a defeat. On the contrary, good governance means having the willingness to compromise. So, don’t just berate politicians who make concessions.