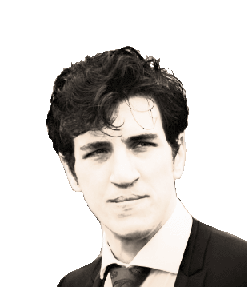 Sjoerd Griffioen received a Bachelor’s degree in history as well as a Bachelor’s and Master’s degree in philosophy from the University of Groningen (RuG). As of September 1, 2019, Sjoerd has been teaching at the Philosophy department of his alma mater and at University College Groningen. In the Spring of 2020 he earns a PhD for his research of the German secularization debate of the 1960’s. Aside from his work in academia, Sjoerd also gives lectures and philosophy courses for a general audience. Previously he blogged on the topic of philosophy, see www.denkjewel.nl.

SECULARIZATION AS A CRITICAL DIALOGUE WITH THE RELIGIOUS PAST

Are modernity and Christianity at odds with each other or not? This question sparked a heated debate in post-war Germany. Sjoerd Griffioen took a closer look at this so-called German ‘secularization debate’ and wrote a hefty dissertation about it. Doing so offered him the opportunity to tackle some of philosophy’s big questions: What is modernity? What do the ‘Middle Ages’ represent? And is progress possible?

In post-war Germany there raged a heated debate over the question whether modernity and Christianity are incompatible. At the heart of this debate was the criticism by Hans Blumenberg (1920-1996) of Karl Löwith (1897-1973). The conservative anti-liberal thinker Carl Schmitt (1888-1985) who currently is being ‘rediscovered’ by the new-right as well as the new-left, also joined the debate.

To this very day, Blumenberg’s criticism of Löwith in particular influences the academic discourse on secularization. In Germany and the United States, we’re witnessing a bonafide Blumenberg revival. Outside of the realm of academic philosophy however, Löwith and Blumenberg are virtually unknown. This in spite of the fact that both men posed important questions such as: What is modernity? Is there progress in history? And is modernity anti-religious or merely a continuation of Christianity in a new form?

According to Löwith, the idea of progress is central to modernity. People believe that humans are becoming ever more successful in solving all the world’s problems in our pursuit to establish a ‘heaven on earth’. In essence, Löwith argues, progress is a mere secularized form of Christian providence. To Blumenberg however, modernity is a new beginning. He sees modern thought as a legitimate reaction to the shortcomings of Christianity. The late medieval emphasis on the nullity of man for instance, made life unbearable. It is why modern men feel the need to reject God and to shape their own existence. Löwith’s position can still be recognized in attempts to found typical phenomena of modernity in the so called Judeo-Christian tradition. Blumenberg’s position meanwhile, resonates among anti-religious thinkers who strife to eliminate all religion from modern civilization.

By meticulously studying the writings of Löwith and Blumenberg I found that the research of the German secularization debate is based on a misunderstanding. Anglo-Saxon scholars in particular tend to interpret Löwith through a Blumenbergian lens. This creates the impression that Löwith’s theory has been fully debunked – and is therefore obsolete. But in fact, Blumenberg has created a straw man. He disputes the idea that modernity is illegitimate. The thing is, Löwith never drew that conclusion based on his own views on modernity. His followers did. Löwith’s point remains standing, namely that rather than the disappearance of religious themes, secularization means their transformation. Today, that insight still offers a valuable framework for understanding certain phenomena. Think for example about the seemingly innocent expression that ‘football is a new form of religion’. Or the, considerably more controversial, victory speech by Dutch right-wing politician Thierry Baudet, who in the aftermath of the provincial elections in March 2019, used the leitmotif of resurrection.

“When choosing reason, Löwith argues, there is no place for hope.”

My reconstruction of the secularization debate also shows that the core of Löwith’s argument consists of his criticism of modernity, not his account of secularization. Löwith finds modern thinking ‘unfounded’ not in the sense of it being illegitimate, but in the sense that it is ‘without foundation’. Modern man takes himself to be the measure of all things, and in doing so loses his reference point outside of the human order. Löwith wants to return to a situation in which people are more in contact with nature or the cosmos, with eternal things outside of themselves, such as the orbits of the planets. In the current Antropocene you could rehabilitate this way of thinking.

According to Löwith, modern man is trying to integrate two incompatible things: rational thought and faith in future salvation. When choosing reason, there is no place for hope. This idea is completely at odds with Blumenberg’s atheist defense of the enlightenment and its idea of progress.

If my research makes one thing clear, it is that secularization is an extremely complex notion. It also shows that as long as secularization remains an issue, religion hasn’t yet left the picture. Therefore, it’s more prudent to view modernity as a critical dialogue with the religious past than as a radical break with that past or a seamless continuation of it.